For all you lovers of Krispy Kreme out there, I did it for you. I tried the Whole Wheat Doughnut. 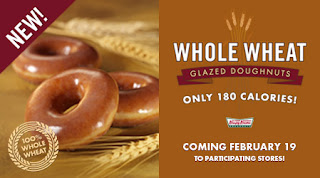 I don't really feel like explaining this to the people who know nothing about it because the whole premise pisses me off.
OK so check this out! Because a few years ago the whole 'low-carb' madness started, Krispy Kreme, which originally had just a few stores here and there and began to expand because people loved the gooey sweet goodness that is a Krispy Kreme Doughnut, BEGAN TO LOSE MONEY! Can you believe that? Because some asshole, who died of a heart condition, told people that carbs were bad for you, these folks could no longer sell what may very well be the most indulgent piece of food in history. The original Glazed Krispy Kreme Doughnut. If you have never had one, check this out, taken straight from the Krispy Kreme Website. I couldn't have said it better myself.

"What's a "Krispy Kreme? When people talk about a Krispy Kreme doughnut, they're usually referring to our signature treat: the Original Glazed. Made from a recipe dating back to the 1930s, our Original Glazed doughnuts have helped set us apart. And if you haven't had an Original Glazed HOT off the line, you need to try one! Look for the Hot Light!
It signals our customers about some really good news. When we turn the light on during certain hours of the day and night, it means that our Original Glazed yeast-raised doughnuts are coming out RIGHT AT THAT MOMENT! So come on in and get some HOT!"

Goddamn...That's like poetry. So anyway, these people with no self-esteem and no direction stopped eating the doughnut. Now, I will admit, the damn thing isn't good for you. It's basically deep fried white bread covered in a sugary glaze and served so hot that it literally slides down yoru throat. But dig this, IT'S NOT SUPPOSED TO BE GOOD FOR YOU! It's a damn doughnut. It's a treat. I bought some today because one of our employees is leaving and we wanted to celebrate her last day and her new career. If we ate the damn things every day, we'd be all hypertensive and what not. That's why it's a treat. To be ha din moderation. Some people just don't get that. Because of some book they read, they swear off the damn things and cost a company that tried to do US a favor by making their delicious treats more accesible to us by opening more stores across the country, lose money.

So here is what they did. They came up with a whole wheat doughnut. Here it is again.

SO I tried the shit. The verdict, not bad. I mean, it ain't the original and if you thought it would be you probably need to go back to reading The Secret or The Purpose Driven Life or whatever book you are reading to help you get through the day this week because your life is so miserable. BUT, it is a nice alternative. It is sweet, but the glaze is different. It's got this caramel thing happening. Kind of like a Sugar Daddy. Decent flavor. In all honesty, it's probbaly a little TOO sweet. I could only eat one which is probably good because it's 180 calories, but I did enjoy the one I had. All in all, it's decent. I hate the fact that Krispy Kreme had to do this because people can't think for themselves, but I respect the way they did it. I was very skeptical but they pulled it off. They gave customers a realistic option when having to make healthier choices in they doughnut consumption. "Healthier choices in their doughnut consumption." That just SOUNDS stupid. I can't believe I just said that. I'm going to get another doughnut. A real one.
Posted by Mr. Opinionated at 9:48 AM

"covered in a sugary glaze and served so hot that it literally slides down yoru throat" omg i want one now dammit!!! WOW!!! i have a cracklike addiction to the damn things. scared of the wheat ones. 180 is good compared to the 350 of the original and i never eat less than 2. no more than 3 either but if i'm feelin extra gluttonous.

clearly "Healthier choices in their doughnut consumption" sounds extra foolish. i mean isn't that beside the point? sigh.