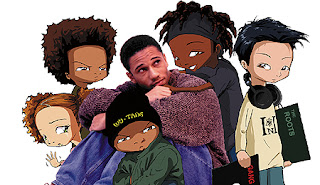 Your groundbreaking comic strip The Boondocks, was edgy and controversial. I absolutely loved it, and not just ordinary love. The kind of love where you fight the greatness of something until you can deny it no longer. I used to hate Michale Jordan, until I watch him eat so many lunches that didn't belong to him, that I had to be a fan. That's how I was with your work. I thought it was ridiculous. Modern-day minstrelsy. I hated it so much that I read it just to be sure I knew what I was hating. And then, I became a fan. I saw the brilliance of it. The way you parodied the black community, with a positive twist; the way you forced people, and not just black people, EVERYBODY to look at themselves, was dare I say? Genius...I once said to a friend, "the only thing that would make this comic strip better, would be a TV show to go along with it." It was like you heard me.

The Boondocks TV show premiered last year and I mean...it was amazing. The perfect Sunday night was a new episode of Grey's Anatomy and a new episode of The Boondocks. Awwwww man...I wouldn't even answer the phone during that 90 minutes. But then, just like a weekend fling, you left for the summer and for some reason I knew in my heart you wouldn't return. And you didn't. But not only did you not return, you QUIT. You quit everything. No TV show, no comic strip, nothing. Something about the pressures of stardom getting to be too much for you and needing a break. OK Dave Chappelle. Next time come up with some original shit. But here is the real beef. If that girl that came for the weekend fling, left me, I wouldn't want her to send me pictures of herself to help get me through...or send her ugly ass friend over to hang with me once in a while. I want her to get the fuck on! Let me get on with my life. And that's what you won't do. You won't leave. Every day, I go to My Yahoo page and I see these weak ass pre-production comic strips that you did and it just feels cheap. The drawings don't look the same, the humor isn't fully developed. That's like Krispy Kreme shutting down but leaving some old stale doughnuts behind for us to eat. I don't want that shit! But then, to add insult to injury, this week you did someething so disgusting that I wrote you off. A RE-RUN! A comic strip re-run. One that I had read already. Are you kidding me dude? I mean, Huey and Riley mowing the lawn was so funny the first time that I emailed it to my dad to reminisce about the days my brother and I would mow the lawn. But the 2nd time around, it's not funny...it's not cute...it ain't cool. You don't recycle comic strips man. I took you off My Yahoo page. I'm done. It's back to Ruthie, Joe, and One Big Happy. If only I could get Get Fuzzy on My Yahoo page. Now that's funny stuff.
Posted by Mr. Opinionated at 10:12 AM